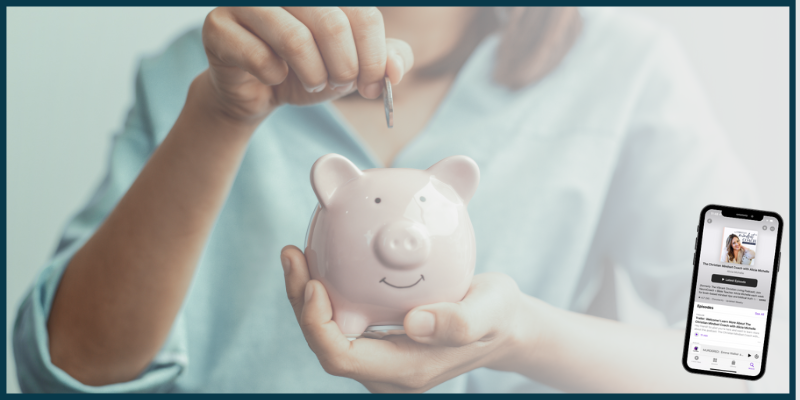 188: What’s Your Money Mindset? Making Peace with Money Fears as a Christian with Linda and Bob Lotich

How does our view of money and provision affect our ability to trust God? In this episode with money experts Bob and Linda Lotich, we talk about our money mindset, and specifically how money fears affect our relationship with God. 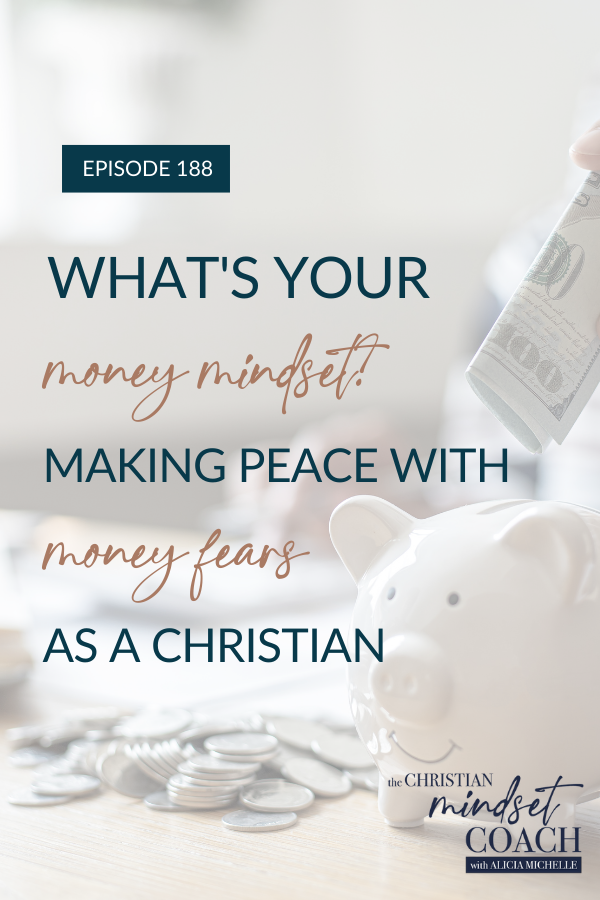 Bob Lotich is an Christian expert on money and together he and his wife Linda have created several resources on managing money well, including their book Simple Money, Rich Life . Their book isn’t just about saving money or getting out of debt, but it’s more about how we can use money as a tool to be successful.

Bob found himself at a breaking point in his early twenties when he was overwhelmed with debt and stranded 1,000 miles away from home with only seven dollars to his name. After crying out to God for wisdom and discovering a simple, biblically inspired formula, he reached a level of financial freedom that he never dreamed possible.

Bob paid off his house by age 31 and even reached a personal goal of giving 1 million dollars by age 40. For the last 14 years, Bob has shared his best lessons with over 50 million readers and listeners on his award winning website, his podcast and his courses.

Bob states that. as believers in Christ, we are not supposed to use money the way that the world uses it. Those who follow the world’s beliefs see money as a source of security and importance. Money is also where many people find their value.

Bob believes that God intended for money to be a tool that we can use to further His kingdom. He always says that he wants to use his money to rob hell and win the lost.

[7:05] How our past affects our current money mindset

Linda finds that there is so much shame when it comes to money. We think things like “if I’m not doing things the right way, then it’s my fault”. This causes feelings of shame to bubble up and then we start to feel like we need to hide things, she says.

For example, we may hide packages on our front porch because we don’t want a spouse to see them. Linda believes that there is so much more freedom to be had and hiding things hinders that.

We all grow up with different money mindsets and then once we get married, we have to figure out how to mesh our beliefs together, she says. Being able to have open conversations with a spouse about money can be challenging but it can help our marriages grow stronger.

Bob and Linda agree that if one of the marriage partners is a spender and the other partner is a saver that can be tough to come to terms with. For example, Linda explains that because Bob is naturally a saver, there is no amount of saved money that is going to make Bob feel secure enough. Linda, on the other hand, is the exact opposite. Because she is a spender, she says there is no amount of money that will cause her to want to save money.

Bob has been tracking his net worth for many years, however, a few years ago he realized how much he hated the term net worth and started to call it “assets under management” instead. Bob says that, biblically speaking, we are all just managers of God’s things so Bob just wanted to call it what it was.

This small change in wording (from “net worth” to “assets under management”) also helped Bob stop defining his own worth based on the number of his net worth. If it’s a high number, this is just a way of making us feel like we are better than others, he says. Likewise, if it’s a low number, then it makes us feel bad about ourselves.

About 15 years ago, Linda’s sister taught her a valuable lesson about worth. Linda told her sister to try on a shirt at the store and her sister declined and said that she was the same without the shirt. That moment caused a lightbulb to go off for Linda and helped her see that we can still be the same person without all the clothes, vacations, and other materialistic things.

[14:16] What lessons can we learn from unhealthy money mindsets?

Bob shared about a time when he struggled with an unhealthy money mindset. Even though God was providing adequately, Bob found himself constantly wanting more and being discontent with what he had. Bob had a great goal–to pay off debt. But he had turned that into an idol. He says the fact of the matter is that we can turn anything into an idol.

Because Bob so desperately wanted to be debt free, he lost all of his contentment in Jesus. Bob believes that if we find anything to put our contentment in other than Jesus, we are going to be disappointed.

Bob says, “A healthy money mindset is when you fully trust God for provision because you know He’s your provider regardless of the amount of money in your bank account. You can walk in that freedom and confidence and go into the day without fear.”

On the flip side, if things are going fantastic financially, we are not serving the world, but we are serving God, Bob says. No matter if we feel like money is scarce or in abundance, we can have the healthy money mindset that we are using the assets He's put into our hands to further advance His kingdom.

Linda considers our times of financial abundance as if it’s almost like a test. It’s so easy to just think it's always going to be great and we tend to become prideful of that, she says, but we need to take a step back and figure out what actually has our heart during those more challenging times. “During those ups and downs is when we really get to know the Lord on a deeper level,” she adds.

[21:41] What is the difference between a poverty mindset and an abundance mindset?

A poverty mindset is when we think that there is never going to be enough money, whether or not the money is physically present. It’s a mindset about money, not necessarily a state of financial provision. Someone can have a poverty mindset and be overflowing with money; or they can have an abundance mindset and not have much money at all.

Bob shares that, over the years, he has really had to work through his poverty mindset. This is something that a lot of Christians struggle with because we don’t always fully understand God’s ability to provide for us.

To better explain how an abundance mindset simply is a mindset of trusting God for provision, Linda shares a story about a time when her uncle sat down at a restaurant, ordered a bunch of food, and then realized that he didn’t have his wallet. Instead of freaking out about not having his wallet, Linda’s uncle enjoyed his food and even ordered more food. Instead of having that poverty mindset, he knew that it was going to work itself out somehow. Linda wishes that she could be like that more often in her relationship with the Lord. Bob agrees with Linda’s sentiments and would love to be more secure in God being able to work everything out.

When we step into an abundance money mindset, we are saying that God is trustworthy and we can release our control of the situation.

[28:02] How does our money mindset affect how we view success and failure?

Bob has struggled with the definition of success in the past. Defining success as a Christian is not the same as the world’s definition of success so this has been a work in progress for Bob. One thing he has been asking himself is “Am I obedient to God and the things he asked me to do?” If we are obeying Him and the things that He's asking us to do that hits the nail on the head in terms of success as a believer, he says.

As a former numbers addict, Bob strives to continue pushing forward in his business and finances in general without making numbers the primary way he defines success.

For Bob, eternal financial success is not about any number that we accumulate on Earth. He says as believers, we should be measuring our financial success by how much we give. Fifteen years ago this concept led him to create a spreadsheet with their “net given” instead of their “net worth”.

Because Bob and Linda now focus on their “net given” instead of their “net worth” , instead they celebrate each time they hit a new giving milestone. They enjoy focusing on the “net given” amount because they know that the impact is much greater and beyond just themselves. Bob says number has so much more significance, and it’s a number that Bob feels good chasing. Bob is on a mission to get that number as high as he possibly can because it's improving the world around us.

[31:39] How Linda has managed her money mindset in regards to success and failure

As a child, Linda’s family went through ups and downs when it came to money. Her mother would look at people with more and say “it must be nice”. When Linda got older and started developing her own money mindset, she realized that the poverty mindset and prosperity gospel were all about the amount of money you had or didn’t have and not what was in your heart.

She believes that whatever is going on externally, our heart needs to be in the right place. Linda found that when she was experiencing more abundant times, she had to check her heart. If she is living for the Lord and her life is His, then the success looks a whole lot different.

[35:57] How to identify our money mindset and ask God for guidance

What really struck you in this conversation about money and money mindsets? Did it bring up things for you about money mindsets that maybe you believed as a kid or you were told as a kid? Do you find that you have a poverty mindset or an abundance mindset?

Connect with Bob and Linda:

Other Podcast Episodes on Money Mindset:

FREE WORKSHOP: How to Break Free from Feeling “Never Enough”

You don’t have to stay stuck in the overwhelm and exhaustion of perfectionism, people pleasing or trying to prove yourself worthy.

What if I told you that there was a SECRET WEAPON for rewiring your mind to align with God’s truth: the proven BRAIN SCIENCE TOOL that pro athletes and high achievers have used for decades?!

Join the hundreds of Christian women who are using this highly effective brain science tool to find healing from a lifetime of worry, shame and striving for acceptance.

Go to VibrantChristianLiving.com/mind to sign up for this powerful free training!