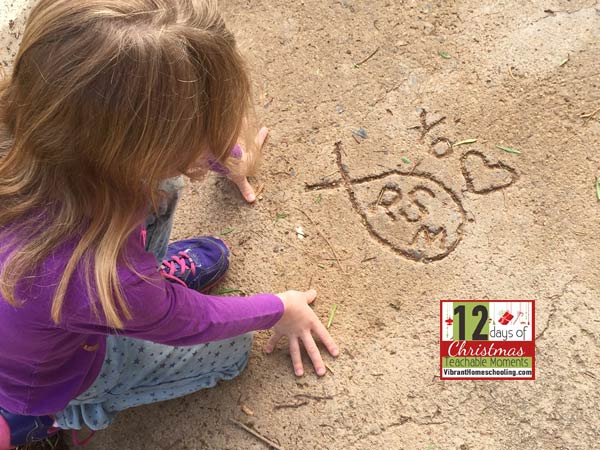 Day 11: Short Term Missions: What My Daughter and I Learned in Mexico This Christmas 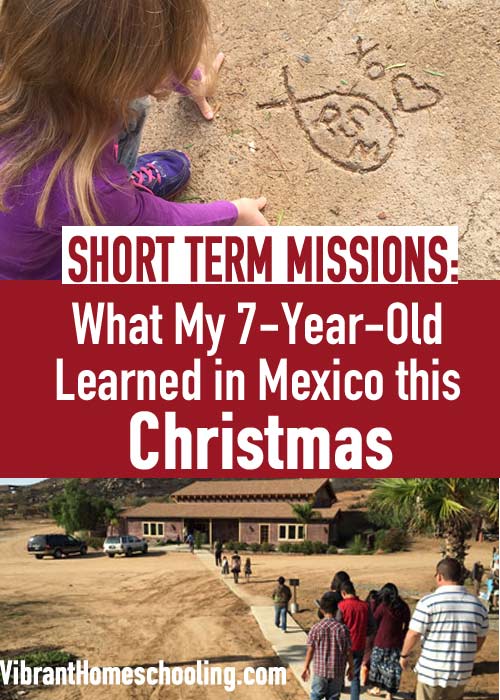 This post is Day 11 of Vibrant Homeschooling’s “12 Days of Christmas Teachable Moments” series.

The streets were nearly empty as our pickup truck—filled with cans of food and other much-needed supplies—slowly passed the dilapidated houses with broken down walls and razor-wire fences.

Although I’d never visited this particular city in Mexico, I’d seen extreme poverty before and had mentally prepared myself for what we might encounter.

Previously, as we’d crossed the border check-point, I’d also tried to prepare my seven-year-old for what she might see. But I knew that no matter what I said, she would probably be taken aback at the sheer differences—in language, in culture and in economic need—from her everyday life in a middle-class American suburb.

The night’s stillness matched my daughter’s silence in the back seat of the truck’s extended cab as we continued our trek through the city. I knew she was just taking it all in, processing.

Just then, a car unexpectedly cut in front of us at a makeshift stoplight. We stopped abruptly and all of us (including the older gentleman from our church who was driving our truck) exhaled deeply. The other driver swung wildly around a corner and disappeared onto a darkened side road.

The danger now passed, I curved my neck around to see my daughter. “Are you OK?” I asked.

“Yeah,” she said, her blonde hair shining in the headlights of the car behind us. “It’s just… different here.”

And thus began our first lessons of our short-term missions trip to a deaf school in Mexico.

Mom, These Are My New Friends

The following morning we awoke in our new home: a serene collection of simple buildings built on a rocky hillside. Each had a distinct purpose on this very different school campus: this one was the boys’ dorm; that one was for the girls; and this small group over here were the classrooms.

We dressed quickly and walked toward breakfast, taking the long route to the “chow hall” so as to fully absorb the scenery. 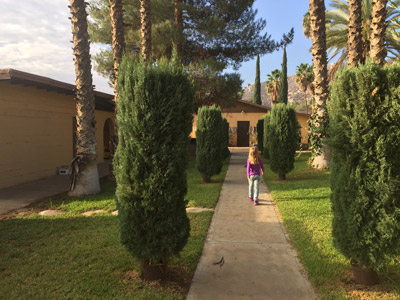 There was barely a sound outside as we walked, making it hard to believe that around 30 kids and a dozen adults lived here full time.

Then a low bell noise—more like a buzzer—rang overhead and we watched the kids begin to trickle out of the buildings and toward breakfast. They were all well-dressed (I learned later that the kids received gently-used clothes from other churches in the States) and extremely polite. A few of them waved shyly at my daughter and I.

We found some other friends from our church in the chow hall. My daughter raced to hug one of the young women, a beloved friend of the family that used to babysit our kids when they were younger.

“Come sit with me,” she said to us and ushered us to a table filled with teenage girls from the school. Our friend had spent two years serving at the school as a dorm mom, and therefore she not only knew most of the kids at the school but she was fluent in Mexican Sign Language. 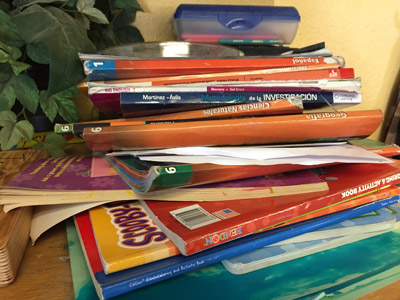 Another bell rang overhead and a light flickered near the buffet area. “We’re about to eat,” our friend explained. “Be sure to keep your eyes open when we pray together over the meal.” We did, and we watched as one of the students stood in front of the group and signed the prayer (while someone else spoke her words in English).

Her beautifully simple prayer warmed my heart, and I realized that there was to be instant community and connection with these kids. 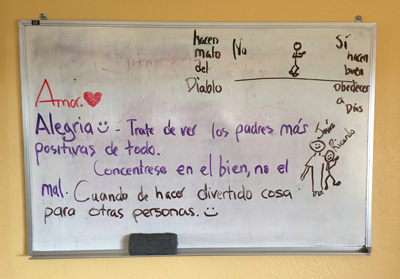 This was confirmed a few minutes later when the girls at our table began gawking and gushing over my friend’s new engagement ring. Clearly, yes, in many ways they were teenage girls like any other.

My daughter, in her fearless and passionate style, quickly became an active participant in the conversation. She picked up the signs almost effortlessly and engaged over and over with the deaf girls.

Then she got up from her spot at the table and walked over to where a little girl with light eyes (that was about the same age as her) was sitting. She made a few signs, and the girl repeated them back to her, along with a smile.

“Mom,” my daughter said, “I just told her that she’s my friend.”

It really was incredible to see my daughter engage with these girls throughout the whole weekend—“talking” with them over meals; playing jump rope games; climbing with them on the monkey bars outside; and even showing them videos and photos from our camera. 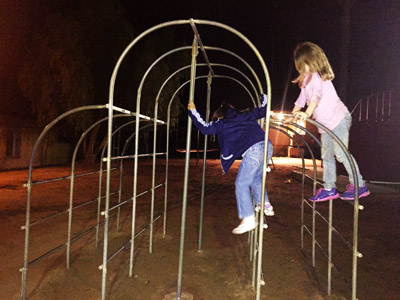 Clearly these girls lived in a different world than she; and yet my daughter acted as if they were no different from her “hearing friends” back home.

Although we spent a fair amount of time connecting with the kids, our church visited the school each year at this time to bake, decorate, package and wrap a plate of Christmas cookies for the kids to take to their parents when they returned home over Christmas break. 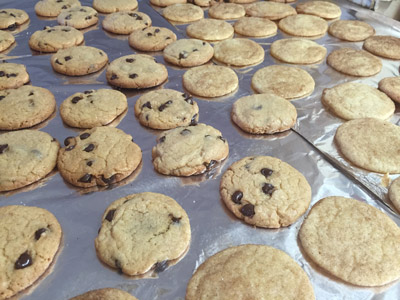 For these kids—many of whom came from impoverished backgrounds and who receive very little sugary treats even while at the school—these baskets were coveted, highly prized treasures that they looked forward to each year. In fact, that’s why our church is known as “the cookie church” to these kids. 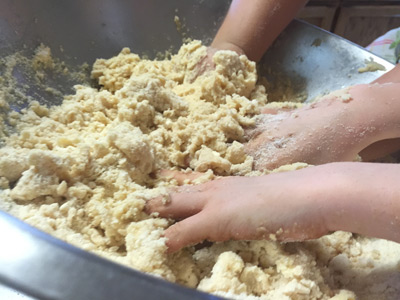 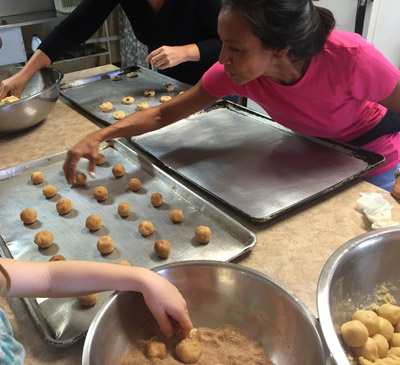 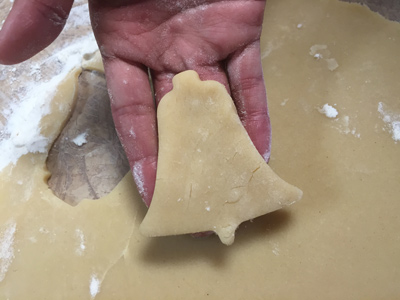 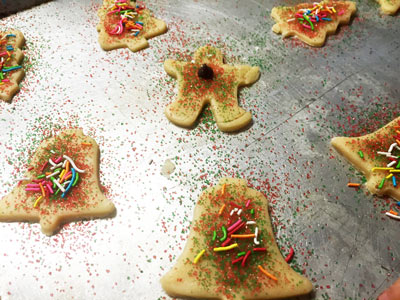 Yes it was fun, but let’s just say that Princessa got a enlightened look at the meaning of hard work (especially that of hard work in a hot, busy kitchen). “I am exhausted!”  she exclaimed at one point, her hands covered in cookie dough. She more than earned her occasional break out on the playground and swings (and of course, she became an official cookie taster like the rest of us).

One Voice Singing Together

“Mom, if the kids can’t hear or speak, how do they worship God (in song)?” This was a question that she’d asked repeatedly before our trip.

I tried to explain that deaf people could sign the words in a song instead of singing them. However, as someone who had never seen this, this style of “worship” still didn’t make sense to her.

That’s why I was so pleased when I learned that we’d get to experience a church service with the kids during our visit!

It would be easy for me to simply tell you that during worship, one of the school’s missionaries stood on the stage and signed the words to the song so that the kids could “sing” along. Because that in fact was what she did.

But to simply describe her actions as a mere “translation” would be not only inaccurate but also a dim view of this incredibly connective and collaborative experience.

I hate to even show you a picture because it really doesn't capture the feeling, the emotion… the presence of God in the room. 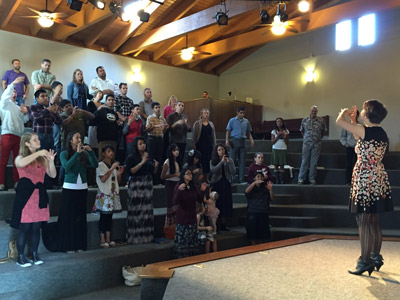 It is clear that this woman—a young American who had her own beautiful testimony of how God had called she and her husband to the school—translated the song into a message that these kids could understand with their minds as well as their hearts.

She used her hands, her face and her entire body to worship God. It was transfixing to watch her, with her eyes fixed to heaven, so clearly communicating the deep spiritual meaning behind the songs.

Moreover, we were all experiencing God’s presence together—whether we were deaf or hearing—and, as one body, we were communicating our love back to Him.

The only way I can describe it is to say it felt like what I imagine heaven to be like: people from every tribe and nation exalting the name of Jesus together without any boundaries or imperfections.

I looked at my daughter, who like me was trying to both sing and copy the signs.

I simply mouthed, with tear-filled eyes, the word “worship.”

I knew my daughter understood completely as she smiled back and nodded.

Experience Is the Best Teacher

You know that saying that sometimes you just can’t teach a kid something at home? That’s what I felt like as we were packing up our things and heading back to the States.

I could list a series of character traits that were strengthened while we were there (sacrifice, humility, bravery, generosity) but clearly, there were deeper hidden treasures that both she and I had gained. Things that I couldn’t necessarily quantify or describe. Things I certainly couldn’t teach her at home.

I knew my daughter felt this way too because she had a hard time saying goodbye.

“Mommy, I don’t want to leave here,” she said while giving farewell hugs to her new friends. Clearly her heart had been moved outside her sense of “normal,” and she was changed by the experience.

What a beautiful Christmas lesson for she and I—one that we will deeply treasure.